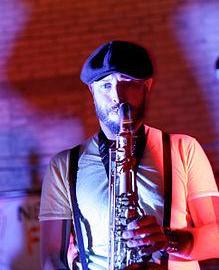 an American saxophone player, best known for his recordings and live performances with The Killers. He toured widely with the band in 2008–2009, and also played on the albums Sam's Town and Day & Age. Committed Suicide

Ask your friends to light a candle or come back tomorrow to light another candle for Thomas.

You can add to Thomas's profile: