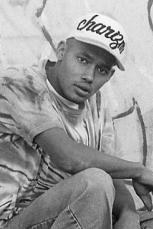 Lost to gun violence on December 16, 1993 in Milpitas, California.

also known by his stage name Charizma, was an MC from Milpitas, California, United States. He is best known for his work with Peanut Butter Wolf; the two artists formed a duo after meeting in 1990 but their musical partnership was cut short following Charizma's murder in 1993

Ask your friends to light a candle or come back tomorrow to light another candle for Charles.

You can add to Charles's profile: