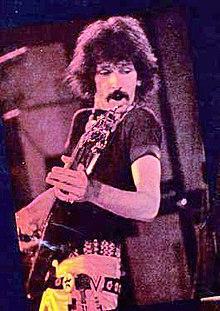 was an American music producer, songwriter, vocalist, and bassist. He is best known to the public as the bassist and vocalist of the band Mountain, whose song "Mississippi Queen" peaked at #21 on the Billboard Hot 100 and has become a classic rock radio staple. Originating in the eclectic music scene in New York's Greenwich Village, he became closely attached to the British power trio Cream, writing, arranging, and producing for their second album Disraeli Gears. As a producer for Atlantic Records, he worked on several projects with guitarist Leslie West; in 1969 their partnership evolved into the band Mountain. The band lasted less than five years, but their work influenced the first generation of heavy metal and hard rock music. Pappalardi continued to work as a producer, session musician, and songwriter until he was shot and killed by his wife Gail Collins in 1983.

24 candles have been lit for Felix.
Light a candle for Felix.

Ask your friends to light a candle or come back tomorrow to light another candle for Felix.

You can add to Felix's profile: