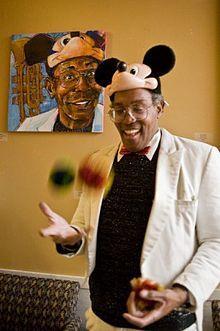 Do you have a better photo of Kirk?

Lost to gun violence on November 3, 2012 in North Portland, Oregon.

also known as "Working" Kirk Reeves, was an American street musician and entertainer best known for playing a trumpet on the west bank bridgehead of the Hawthorne Bridge in Portland, Oregon while wearing a Mickey Mouse hat and a white suit. Committed Suicide

3 candles have been lit for Kirk.
Light a candle for Kirk.

Ask your friends to light a candle or come back tomorrow to light another candle for Kirk.

You can add to Kirk's profile: